Keep in the loop with Michaels Electronics Newsletter

Roll over image to zoom in

This Enerdrive 200ah battery ePOWER B-TEC battery incorporates wireless Battery Monitoring Technology. By downloading the Android or Apple® app to your smartphone or tablet device, you can monitor the following information; 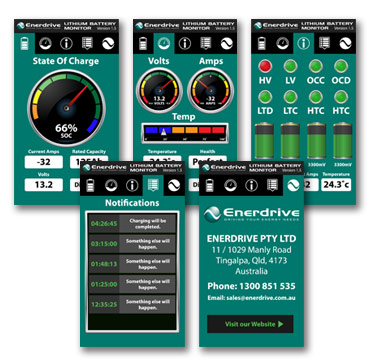 The battery is also equipped with an internal Battery Management System that can monitor and optimise each Prismatic cell within the battery during normal operation. It will protect the battery pack from over charge, over discharge, over temperature & short circuit. The BMS helps to ensure safe and accurate operation of the battery.

The ePOWER B-TEC battery provides 60% more usable power than its equivalent lead acid cousin and being nearly 50% lighter and 30% smaller makes for a superior alternative.

The ePOWER B-TEC battery is perfect for camper trailers, 4WDs (AUX battery), caravans, small water craft, low power communication sites or any other application that requires the use of a single deep cycle battery that meets the amp hour capacity.

With over 5 years of researching, designing and testing lithium batteries and the associated charging systems, Enerdrive are at the forefront of lithium battery systems in Australia. Enerdrive are the only Australian company that can supply a fully integrated self-branded energy system to suit your setup.

With over 1200 complete systems in operation Australia wide, Enerdrive is regarded as the leader in the field of lithium batteries and energy systems for Mobile, Marine and Remote applications.

The same battery algorithms as included in our AC mains ePOWER battery charger. GEL, AGM, Flooded, Lithium and the ability to create  a full custom profile

40A output up to 40+°C with thermo controlled fan cooling

Fully programmable LCD display to show which source is charging the battery along with charger status, voltage and amperage

The Enerdrive ePOWER DC2DC+ Battery Charger is a fully automatic multistage, multi input battery charger with the ability to charge from either an alternator linked to a battery; or via solar power with the in built Maximum Power Point Tracking (MPPT) Solar Controller. With two inputs available, the main/house battery will be charged from either the engine while underway, or via the solar panels when stationary. The process to choose either engine or solar is fully automatic and both functions are controlled from within the unit itself without the need for external relays.

During normal operation the ePOWER DC2DC+ Battery Charger will do a full charge cycle to float stage on the house battery bank with ability to choose either GEL, AGM, Flooded, Custom Programmable or Lithium. Once float stage is reached the charger transitions to a power supply mode to support any on-board DC loads.

The ePOWER DC2DC+ Battery Charger is a fully automatic, set and forget charger. It is designed to quickly and accurately recharge your deep cycle batteries utilising charger algorithms that help to maximise the life of your specialised deep cycle batteries.

The ePOWER DC2DC+ Battery Charger features multistage smart charging technology that enables the charger to be connected to your battery bank permanently. With the input of multiple sources, you can be assured of charging your batteries whenever underway; or when the sun is shining on your solar array.

Stage 1 Bulk or Boost charge; The battery is charged at full rated output current of the charger until the battery reaches its final charging voltage, known as its absorption voltage. In this step, around 80% of the battery is recovered as fast as possible.

Stage 2 Absorption Charge; With the charger voltage held steady, the remaining 20% is replaced with the charger allowing the current to taper off as the battery approaches full charge.

Stage 3 Float; Finally, in the float stage the charger voltage is lowered and held at a constant and safe predetermined level. This prevents the battery from being overcharged, yet allows the charger to supply enough current to make up for the self-discharge losses of the battery, while supporting any additional loads connected to the battery (such as DC lighting and refrigerators). This stage allows for the charger to be used as a DC power supply.

If you are not completely satisfied, come in & see us!

We pride ourselves on our on going support.